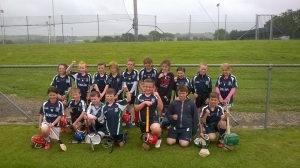 U10’s are playing Rathmore in Tom Creedon Park, Tuesday, 14th Jul, meeting at 7:15, starting at 7:30. Please come out and support the young players.

Saturday was a busy day for Laochra Óg hurling with a lot of events taking place.

U6 and U8 hurling teams took part in a hurling blitz in Cloughduv. A superb turnout with forty five Laochra Óg players playing six games against a very sporting Cloughduv.

Great effort and skill shown by all. Thanks to parents and guardians for their support and to Cloughduv G.A.A Club for holding the blitz. Thanks to trainers for their hard work and commitment. Finally thanks to team sponsors Niall Murphy Tarmac. The U10 hurlers were also involved in county blitz in Cloughduv on Saturday playing Kilmichael, Dripsey and Cloughduv. They played brilliantly and learned a lot as well. Thanks to parents/guardians for taking the kids and giving them the opportunity to play and compete. Many thanks to team sponsor Folláin Teo. 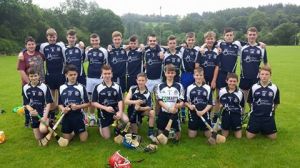 Also on Saturday U16’s hurlers faced Kinsale in Tom Creedon Park Macroom. In damp conditions we were presented with a very entertaining game of hurling. The players played a great game with great effort and skill displayed. The game was hotly contested from start to finish and came as no surprise that it went to extra time. Laochra Óg were unfortunately on the wrong side of the score in the end. Final score was Laochra Óg 2 – 14 and Kinsale 5 – 10. Thanks to team sponsors Macroom Opticians.

Great day out despite the rain. Thank you to the local gun clubs for a great day out and we appreciate the support.