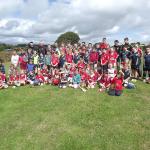 CAMP 4 CHAMPS took place recently in the training field in Tierbeg. The weather was good overall and everyone had a great time. Coaches who took part across the three days were as follows:

Thank you to everyone who helped in any way to make the camp happen. Without you it would be a mammoth task. Thank you to our club sponsors Michael and Nora McCarthy, Glenview Motors.

FAMILY FUNDRAISING QUIZ took place in the Bell Inn in Clondrohid on Sunday 24th August. The weather was not as sunny as the previous week but the event went off without a hitch. The quiz was well supported and lots of prizes in the raffle that followed. Lots of food and facepainting.Thank you to everyone who helped to organise the event and also those who helped out on the day. Thanks to Angela McCarthy, Bell Inn for hosting the event.

Monday 25th August Junior “B” hurlers met Ballinora in Kilmichael (venue changed from Cloughduv). Throughout the game there was little difference between both sides and Laochra Óg won by a point in the end.

Crosshaven. Laochra were missing one or two

players but managed to put in a strong effort and

were the winners at the end of the game.

Iveleary. Both sides were level a couple of times

during the game but towards the end Iveleary

Brian also took part in the U17’s Cork Hurling Development Squad who took part in the intercounty hurling blitz at the weekend. His team won outright on the day. Everyone in Laochra Óg hurling club wish him the best for the future.